Pyrometers: The Importance of Knowing Your Car’s Temperature Levels 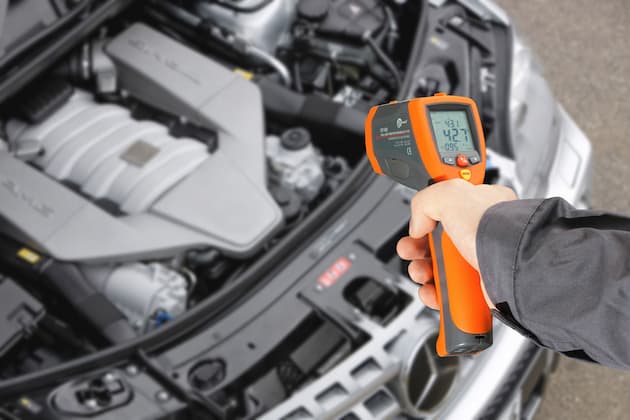 Auto manufacturers go to some pretty extensive lengths to make sure drivers are being kept abreast of what their vehicle’s doing. Speedometers, tachometers, odometers and a whole collection of other gauges, indicators, lights, and buzzers are all part of an ensemble of audible and visible prompts designed to keep drivers, if not somewhat responsive to, then at least mildly aware of what’s happening at all times.

Not surprisingly, the sheer volume of information – not to mention the significance of it all – can sometimes overwhelm the average driver. For some drivers though, the more information they get the better. For turbocharged, diesel-powered, or heavily modified vehicles, exhaust gas temperature (EGT) is one of those hugely important bits of information; and if you just happen to drive a turbo-diesel 4×4 that you’ve done any sort of mods to, then you’ll want to read further and understand what makes staying on top of your exhaust temperature so crucial.

For starters, we need to understand that every vehicle is designed to operate within an optimal temperature range, and that EGT is an indicator of how closely they’re staying within that range. Excessive heat – and its root causes – are an engine’s worst enemy; which is why you need to have a K-type EGT pyrometer sensor probe mounted on your exhaust to measure rapid changes in exhaust temperatures exiting the cylinder head… and why you also need to have a readable aftermarket EGT gauge to go along with that sensor.

Amid the plethora of gauges in most vehicles, an EGT gauge generally won’t be among them. If you can imagine, however, how much further the addition of larger tyres, beefed-up suspension, and a host of other mods can push a 4×4 or RV’s engine beyond what the manufacturer intended its optimal temperature to be – especially if it’s spending a lot of time climbing hills or towing trailers – then it’s easy to see why you’d want to keep a watchful eye on your EGT.

And because the damages caused by high EGTs are cumulative, not immediate, an EGT gauge with an alarm is going to provide those initial, critical indicators that a situation could exist that needs your attention.

In short, it doesn’t matter if you’re using an analog or a digital EGT gauge; you need to make sure you have one that’ll reliably provide real-time info to put a quick check on a potential high-temperature headache.

For vehicles that don’t already have a threaded fitting in either the exhaust manifold or aft of the turbo for installing an aftermarket EGT sensor, then you’ll have to have one drilled. If you’re currently in the process of fabricating an aftermarket exhaust or turbo system, it’ll be easy. The real question, however, is where exactly is the best location to install it.

Unless you’re talking about very specific applications involving mammoth-sized turbos or pure competition engines, the best mounting location will probably be wherever there’s space available to reach the pipes.

If space isn’t an issue, taking temperature readings closest to where the exhaust is exiting the cylinders (at the manifold ahead of the turbo) is going to be the best. Not only are the quickest reading available directly behind the exhaust valves, but because exhaust temperatures can vary by as much as 200ºC just between the fore and aft turbo positions, that’s where the reading will be most representative of what’s happening inside the engine.

When it comes to determining what temperatures you need to be on the lookout for, the truth is it’s not as easy as working off of a fixed value from a manufacturer.

It’s not a static, no-load number; and although a baseline reading of what your engine’s normal exhaust temperature would be before any mods are made could even be helpful, factors like environmental conditions, your vehicle’s setup, your driving style, and even the precise location and depth of the sensor probe itself all contributor to what the right temperature is going to be.

Ideally – and with all factors considered – the “right” temperature is the temperature the engine is performing its best at, under load … and that’s invariably something you’ll have to make the determination on.

What you can comfortably bank on, however, is that a 650ºC – 700ºC reading directly behind the exhaust valves is nearing the limits for a mildly modded but well-driven turbo-diesel 4×4. Anything beyond that, or for sustained periods, is slowly creeping into the realm of forged pistons and other high-performance engine bits.

As most EGT gauges max out at 1200ºC, be aware that that’s strictly the realm of extreme performance engines. Anything beyond 900ºC on a stock engine and there’s an excellent chance that you’ll be walking home.

At the end of the day, there’s no question about it: keeping temperatures low increases engine lifespan, and adding an EGT gauge to your dashboard is one of the few instruments that’s guaranteed to make a difference in your engine’s survival.

Exhaust temperature is, after all, a direct measurement of just how well an engine’s running; and a pyrometer sensor is a small investment for ensuring your vehicle isn’t just producing power, but is producing it reliably. If you don’t already have an EGT gauge on your turbo-diesel, you need to consider doing it today. You’ll be glad you did.