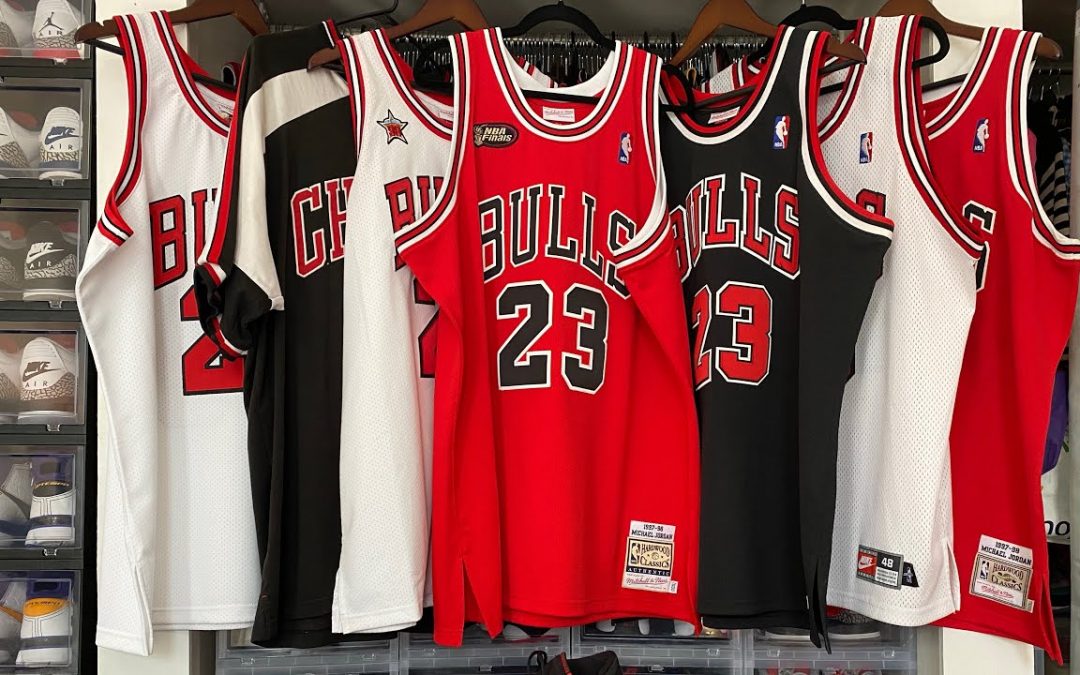 The impact Michael Jordan had on professional basketball cannot be more profound. No other player in NBA history is as widely recognised as altering the game to the standards and levels of athleticism that we see today. His sheer on-court presence, scoring ability, defensive tactics, and leadership lead to one of the longest winning streaks in the game’s history. The Chicago Bulls was the dominant team in the 1990s, leading to six championship titles. And at the helm of that team was the 23 jersey.

Sporting stardom spread into other spheres. The Gatorade “Be like Mike” commercial aired in 1992, followed by endorsements and the growing popularity of the Air Jordan brand. Everyone, amateur players, businessmen, and schoolkids alike were snapping up anything remotely related with Michael Jordan. Though in retirement for nearly two decades, his official NBA Michael Jordan jerseys are still highly sought after.

Getting Your Hands on a Michael Jordan Jersey

If your intent is to be like Mike and own a 23 (or 45) jersey, you can either purchase a throwback jersey by Mitchell and Ness, or search for a vintage jersey online. There are different designs, from the famed 23 jersey that earned the Bulls the unrepeatable run of consecutive titles, and later on in the Washington Wizards, to Jordan’s short stint wearing the 45 jersey in his comeback from giving baseball a go. All official vintage jerseys are collectors’ items and are getting hard to find.

Why Mitchell and Ness Jerseys?

Mitchell and Ness are famed for their throwback jerseys in all major American sporting leagues. They provide some of the most popular jerseys ever worn in the NBA, as well as the MLB, NFL, NHL and MLS. In Australian sports, they produced the official jerseys worn by players in the NBL series up to 2018. In the late 1990s the company launched the Hardwood Classics line, and have produced official vintage Michael Jordan jerseys since buying the rights in 2014. This is also their top selling product. If you want the closest to what Jordan wore on the court, then this is the jersey to get.

Mitchell and Ness make Jordan jerseys from the 1991 Championship title, running all the way to the last win in 1998. They also have Michael Jordan All-Star jerseys, with Jordan having played a record 14 games and winning the MVP title five times. If this isn’t enough, you can get your hands on an authentic jersey as MJ’s contribution to the first Dream Team ever to play in the Olympics, back in 1992. Picking one might seem more easily said than done.

All Mitchell and Ness Jordan NBA Michael Jordan jerseys hark to the original jerseys he wore when playing. They come in the same specifications as the original jerseys, with the high-quality polyester mesh body having some heft. In the 1990-91 season, the jersey has the screen-printed BULLS logo at the top and the 23 in red just beneath, and at the back you’ll find the name and the player number, again in red, and set against a white background.

There is clear attention to detail at work with the woven Hardwood logo at the bottom left corner and the season year/s and Michael Jordan name. The official NBA logo sits at the top left. Jerseys from other seasons also have authentic touches that mark the significance of the title and year. One MJ jersey, that abstains from the traditional white or red, is the 1996-97 black pinstripe jersey MJ wore when winning his fifth MVP title. This has a gold NBA logo stitched in the top left corner to mark the 50th anniversary of the NBA.

The jerseys by Mitchell and Ness strive to replicate in the finest detail the original jerseys worn by NBA players. The throwback Jordan jerseys are their bread and butter, and they produce the best there are. Prices might be a bit steep, but you do get what you’re paying for. Sizing is available from Small to 5XL, so you’ll definitely find something that fits. Going for one size larger allows you to wear this as part of a casual outfit. Top this with an official Chicago Bulls jacket for the colder months, and don’t forget your pair of Air Jordans.

Looking out for Fakes

Vintage NBA Michael Jordan jerseys abound in every corner of the net. They all claim to be jerseys worn by Michael Jordan at important matches. Authentic pieces have been sold for millions at auctions, the most recent and the one to reach the highest price was the 1983 jersey he wore when winning the NCAA best player title while playing for the University of North Carolina.

But you’ll also find millions of fakes. The first giveaway is the low price. Then there’s issues with overall quality, especially in the stitching, and the skewered logos, names or numbers. Washed out colours also means that these are fake than something Jordan might have actually worn. Stay clear. The MJ jerseys by Mitchell and Ness are your best bet in getting as close to the living legend. They’re available direct from the company’s Australian site, or you can get good deals when shopping at exclusive stores stocking all things basketball.